Interview with Donald Robertson about his new book on building resilience

Donald Robertson, who combines a strong interest in and knowledge of ancient Stoic Philosophy and  modern  psychotherapy, especially CBT,  has just written a new book on Building Resilience. I recently caught up with Donald to find out more ...

Donald,  I'll start with a key question - Who is book for?
The book is aimed at the general public but will also be of interest to therapists, counsellors and coaches, who might want to use it with their clients.  Resilience training has particularly been studied in relation to specific groups such as schoolchildren, the elderly, the military, and those working in demanding professions, overcoming trauma, or facing particularly stressful or demanding situations in life.

There are a lot of positive psychology books around these days. What makes your book different?
Two things.  This book is aimed at resilience-building, which means that rather than targeting a specific problem that’s already present, and attempting to remedy it, it aims to help people build more general-purpose coping ability, across the board, and thereby to prevent certain problems as well as improving current coping.  It teaches a range of cognitive-behavioural approaches to general stress management and resilience.  The second thing, which also differentiates it from other books on resilience, is that it incorporates many elements of third-wave or “mindfulness and acceptance-based” cognitive-behavioural therapy.  Research from within the resilience field shows that resilient individuals are not immune to negative feelings.  They feel sad, anxious, angry, etc., but cope well so that long-term harm is minimised.  Hence, this book focuses on teaching people to accept their feelings rather than struggling against them, which requires mindfulness and psychological distance from upsetting thoughts and beliefs.  Moreover, resilience is normally defined as the avoidance of clinical anxiety or depression or, in children, the ability to function well as measured by meeting certain academic or developmental goals.  Resilience literally means “bouncing back”, although often it’s more like a gradual climbing back, following trauma or stressful life events.  However, we lack a general-purpose definition of what the level of functioning is that a “resilient” person is supposed to be bouncing, or climbing, back toward after a setback.  I’ve incorporated an emphasis on the role of personal values in this book and proposed the novel idea (I think) that each individual should perhaps define psychological resilience in terms of their ability to retain (or recover) their commitment to their most important personal values, in the face of adversity.

One of the nice things about Positive Psychology in general and resilience in particular is that the ideas can be helpful to all of us, not just those suffering from psychological disorders. Are there any ideas you use on yourself and if so which are the most beneficial?
The chapter on applied relaxation describes the birth of my daughter, Poppy.  My wife, Mandy, used these coping skills to help her during pregnancy and labour.  She gave birth at home without any medication whatsoever, using only relaxation and attention coping skills to manage during labour.  I’ve used most of the techniques in the book myself at some point.  I’ve been interested in Buddhism since I was a teenager and so mindfulness meditation techniques have always been part of my personal repertoire.  However, over the years my interest shifted from Oriental practices to Western philosophy as I discovered that in Stoicism we have a system of personal development and resilience-building that’s native to the Socratic tradition.  So the part of the book that’s most personal to me and most relates to my daily routine is the last chapter on Stoic philosophy.  I try to pay continual attention (prosoche) to my thoughts and feelings, to remind myself that thoughts are not facts, and to distinguish between what’s under my control and what isn’t.  I try to live in the present moment, and to remind myself that actions can fail and that it’s the intention that matters more than the outcome.

When I wrote my book, Wise Therapy, I found that I left out more than I put in. Are there any ideas that you had to leave out of the book that you are willing to  share?

Yes, I changed my approach in the chapter on using strengths. You can read  the original  version free of charge here

Thanks Donald, I look forward to reading the book. 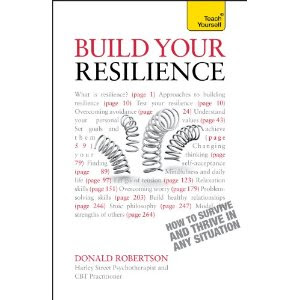 Resilience: Teach Yourself How to Survive and Thrive in Any Situation (Teach Yourself: Relationships & Self-Help) by Donald Robertson  is available from amazon.co.uk