How other people's failures can spur you to success

There's been a lot of  successful people failing  recently - enough to make up a supergroup - like, say, the Spice Girls.  Comedian Ashley Baker  certainly thought so ..... 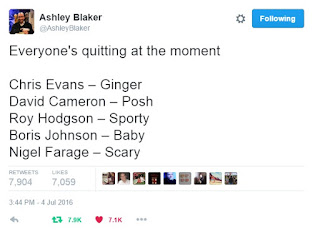 Tony Blair and Michael Gove could easily be added to this list of recent  and very public failures, though I'm not sure which Spice Girls they would be ...

Whilst schadenfreude is a very human reaction,   more positive  responses are  also possible. That's what this post is about  - How other people's failures can spur you on to success.

So what are some constructive reactions to the demise of the successful? Here are a few better ones :-

"Failure is part of the process  of success"

"I shouldn't even call it failure.  I should reframe a setback as not reaching my target yet"

To which Edison replied :- 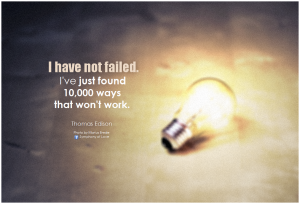 There are two basic views about success.

The first is that either you have talent or not. If you've got it, then  you should succeed pretty much all the time. You shouldn't need to work at it. If  you haven't got talent, there's no point even trying. This attitude  is called a fixed mindset.

The other view is that talent is less important than effort. Even if you've got talent, you will need to work hard and purposefully, and you can expect to fail plenty of times on the way. If you aren't blessed with so much talent, you may still be able to reach a high level of achievement, given sufficient practice and determination. This attitude is called the growth mindset. Betty Edwards' art classes for adults who (like me!) have been told they are useless at art, but wish to see if they can improve, is a wonderful illustration of what people can achieve if they embrace a growth mindset. The before and after self-portraits of those who attended her 5 day art course are a revelation and an inspiration.

Whilst there is some evidence that at least one of the famous five mentioned in the tweet is seeing his failure in growth mindset terms, this post is designed to help you rather than them...

So what can you take from this? I think there are two main lessons.
If David Cameron, Chris Evans and the rest can fail, why should the rest of us expect all of our enterprises to work?  Better to try and fail than never to try at all. One of the commonest regrets of the dying, according to a nurse who made a study of it, was not having the courage to live a life true to oneself.
Not everything we do will succeed. The trick to achievement isn't so much to have self-confidence (that would be the fixed mindset, either I have got it or I haven't) as to expect not  to succeed sometimes  and then to learn from your mistakes. If you don't get a job, get feedback, take note of it and apply for another job using the feedback.  If you have a row with your partner, or get angry when you shouldn't, analyse what has gone wrong and plan to do differently next time. If you can't draw for a toffee, go on Betty Edwards' 5 day course .