Since 2012 I have been a member of the Modern Stoicism team, based at the University of Exeter, which aims to promote knowledge of Stoicism and facilitate research on the effects of practising Stoicism.

This page summarizes what Stoicism is, why I think it is helpful and also links to my and other writings about Stoicism

Stoicism is an ancient philosophy of life practised in ancient Greece and Rome. Since then it has been influenced many thinkers, for example Christian philosophers, Spinoza and the originators of Cognitive Behavioural Therapies. It has undergone a modern resurgence, with many articles and books written in the last 5 years.
Amongst the key ideas of Stoicism are
Virtue (living like an excellent human being) is the supreme human good. Other things (like health, money and pleasure) may be naturally preferred to their opposites (illness, poverty and pain) but virtue is more important - virtue trumps other things we might consider important.
We can take charge of our thoughts and judgements.   Although we cannot control our initial thoughts and impulses, we can control how we respond to them. This can empower us to live well, according to reason
We have the ability to reason well. Although we can all be prone to being irrational, we all, with training, can learn how to use reason well. If we do so, we will live according to the key virtues.
The key virtues are wisdom (including practical wisdom), courage, justice (including compassion) and self-control (or moderation).  The virtues are inter-dependent. You need all of them. There are also many other virtues, including patience, kindness, and tolerance.
By taking good care of our thoughts and judgements we can manage our emotions well. How we think affects how we feel, so if we notice our judgements, think rationally and also choose to care mostly about virtue, we will also be relatively tranquil.
Happiness is a by-product of virtue. It so happens that if you practice Stoicism, you are quite likely also to be happy.
Ancient Stoics also had a distinctive worldview, believing in causal determinism and a wise, benevolent and living cosmos. Modern Stoics have different views about the relevance of these ideas for modern Stoicism

See my very short guide Stoicism Made Simple  for how this works in practice.


Why I think Stoicism is helpful?

You may or may not agree with all of the above principles of Stoicism. My own view is that whether or not all of these ideas (such as virtue being the supreme good) are true, they are very helpful. Some reasons for this are:-

What is Modern Stoicism?

In many ways Modern Stoicism is similar to ancient Stoicism:
To begin with the most obvious point , Modern Stoicism uses English (mainly) rather than ancient Greek or Latin. This is not an entirely trivial point since language undoubtedly affects our sense of key concepts such as virtue and emotion. Similarly Modern Stoicism is conducted largely through means of communication unavailable to the ancients – such as social media, the internet and audio recordings.
Modern Stoicism focuses mostly on the big Three Roman Stoics – Epictetus, Seneca and Marcus Aurelius and their interest in ethics and what we would call psychology more than for example ancient Greek Stoics like Zeno or Chrysippus and other areas of interest to ancient Stoics such as Stoic physics, cosmology and logic.
Some modern Stoics try to update Stoicism to take into account contemporary scientific knowledge. This includes neuroscience, psychology and the use of modern research methods.
It would however be a mistake to see Modern Stoicism as a homogenous group Some Modern Stoics see their role as faithfully bringing the ideas of the ancient Stoics to a modern audience in an accessible manner, interpreting the ancient thinkers in a way that makes their ideas most appealing and logical. Others wish to develop a “new Stoicism” which may well contradict some ancient Stoic ideas such as “The cosmos is a wise living thing”. They may replace a dichotomy of control with a trichotomy of control. A third wing of Modern Stoics take a strong interest in Stoic ideas and practices without necessarily endorsing all of its doctrines, such as virtue being sufficient as well as necessary for flourishing. This third group may not identify themselves as Stoics but are nevertheless keen to incorporate some Stoic ideas into a practical philosophical and psychological system and practice.
The beginnings of “Modern Stoicism” could be traced to a number of events, including no doubt books written by Irvine, Robertson and Becker. My own introduction to Modern Stoicism began when I was invited to a seminar at the University of Exeter by Professor Chris Gill back in 2012. We were a small group, with low expectations and little idea that “Modern Stoicism” would capture anyone’s imagination.
In my view a key part of Modern Stoicism’s success so far has been its non-doctrinaire approach. Philosophers and psychotherapists have been invited to write articles and talk at conferences because they have something interesting and, hopefully, constructive to say about Stoicism, whichever “wing” of Modern Stoicism they would identify with. I like to think of Modern Stoicism as a meadow full of many beautiful but different flowers. Let them all bloom.

See https://modernstoicism.com/symposium-what-is-modern-stoicism/   for other views

My writings on Stoicism

Published on the Modern Stoicism blog :-

Interview with Tim LeBon  on Stoicism 2016

Symposium - What is Modern Stoicism (with other team members)

The Debate: Do you need God to be a Stoic?  (with Mark Vernon)


Published on my Socrates Satisfied blog

The nightmare has come true - can heaven - or philosophy - help us?

Stoic Anger Management Quiz - how Stoic are you?

Stoicism - Why all the Fuss?

Modern Stoic Meditations #3: Stoic advice on how to be more self-controlled

Are you a Stoic or an Epicurean?

Match of the Day Philosophy Special

Mentions on other sites

Keep Calm and Get Your Stoic on - Matthew Sharpe 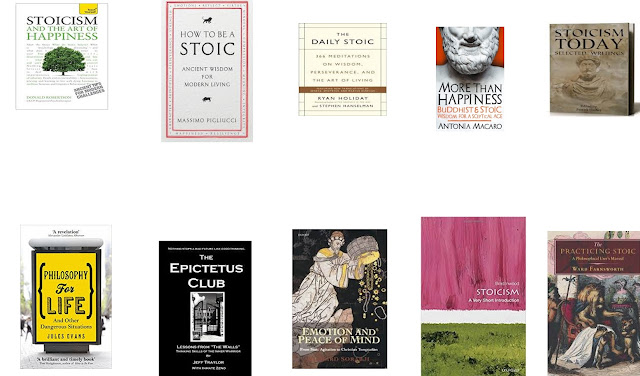